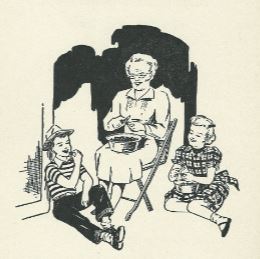 The screen door slammed.  Jim came in on the cool back porch and dropped down on the bench close by Grandmother.  Jane, his twin sister, was helping Grandmother clean strawberries.  After watching them for a minute, Jim reached over, picked out the largest, reddest berry from the pan and popped it into his mouth.  Jane squealed her protest, but Jim only grinned and watched to see if Grandmother cared.  Grandmother was smiling; so, he picked out another berry before he asked the question that was on his mind.

“Grandmother, why do people get baptized?”

“Well, Jim,” Grandmother said slowly, “we are baptized when we become members of the church. What makes you ask?”

“Well, David is going to get baptized next Sunday.  He said he will be baptized in the pool at the church and he seemed to think it was very important.  I asked him to go with me on a bike to the top of Little Mountain, but he said that he couldn’t go because he was going to be baptized.”

“Yes,” said Grandmother, “being baptized is important.  Since there isn’t a Church of the Brethren in the town where you and Jane live, you have never seen anyone baptized the Brethren way.  Your father and mother hope that you will learn a great deal about the church while you are staying with us this summer.”

“Why do they take you into the water and dip you under three times, like David said?” asked Jim.

“It has a spiritual meaning, Jim,” said Grandmother.  “You see, everything that we do in the Church of the Brethren is based on some Scripture or some practice which was taught by Jesus. The whole New Testament is our guide.  A long time ago a man named Alexander Mack lived in Germany.  He started studying the New Testament and decided that some things we do in the church, like baptism, should be done in a certain way.  He thought every church practice should be based on a teaching that we find in the Bible and he decided that Jesus practiced the way that we should use.  We are really trying to be like Jesus as much as possible, you know.”

Jim looked thoughtful.  “Do you think that David and I could climb Little Mountain sometime next week if I stay here Sunday and see him baptized?” he asked.

Grandmother smiled.  “I feel sure you could, Jim.  It will make him happy to have you see him baptized.  This Sunday will be a very important day for him.  If you wait until next week to take your hike, perhaps I’ll have time to pack a picnic lunch.”

“Good!” said Jim enthusiastically as he ate another juicy berry. “That settles it.  I’ll wait.”

Jane had a puzzled frown on her forehead.  “Are all boys and girls supposed to be baptized?” she asked.

“Yes,” agreed Grandmother, “but every girl and every boy is supposed to decide for himself when it will be.  You see, when we become members of the church we are saying that we want to accept Jesus and make our lives as much like He wants them to be as possible.  We are also saying that we want to work with the people in the church and help to do God’s work in the world.”

“What are some things that church members are supposed to do?” asked Jim.

“Well,” said Grandmother, “in the Church of the Brethren we are supposed to practice the teachings of Jesus as we find them in the New Testament.  We don’t think that Jesus would want anyone to use strong drink or to smoke or live just for himself.  We think that he wants us to love everyone, to forgive people when they do us wrong, and to share what we have with others.  There are many other things too.  It is hard to tell you all about it at once.  While you are here this summer you will have a chance to learn more about what members in the Church of the Brethren are supposed to do.”

“David doesn’t like Sam Payne,” said Jim as he picked up another big strawberry.  “Is he supposed to love him after he becomes a member of the church?”

“He may not like the things that Sam does any better than ever,” said Grandmother.  “There is a difference between hating a person and disliking what he does. It is good to tell a person you love them, but not all the things they do.”

“One time in my Sunday-school class at home we were talking about being baptized,” said Jane.  “My teacher said that we should all be baptized so that our sins will be forgiven.”

“Yes,” said Grandmother, “baptism means that our hearts and minds are washed clean of the wrong things which we have done.  Boys and girls who have already been trying to do right will think still more about living like Jesus.  I think David is saying, ‘I want to be like Him,’ as he comes into the church.”

“Do you go down into the water because Jesus was baptized that way?” asked Jim.

“We think that was the way He was baptized,” said Grandmother.  “If you will read the first chapter of the Gospel of Mark it will tell you about it.”

“People are supposed to be different after they are baptized, aren’t they?” asked Jane.  “That’s what my teacher said.  She said it was a new beginning, like being born all over again.”

“Some people have to change more than others in order to be Christian, Jim,” said Grandmother.  “David has been going to Sunday school for a long time.  Baptism won’t make him seem different, perhaps, but we hope it will help him to feel that God is very near to him, helping him each day.  He will be baptized in the name of the Father, the Son, and the Holy Spirit.  That means that God is his heavenly Father and loves him as His child, that Jesus is beside him to help him all the time, and that the Holy Spirit is in his heart to make him like Jesus in the things he thinks and does each day.”

“Sound to me like a big order,” said Jim slowly as he sat for a moment thinking about what Grandmother had said.  Then, looking at the strawberry pan again, he reached over and picked out another luscious berry.  This time Jane decided that he was getting more than his share.  Jumping up, she chased him off the porch.