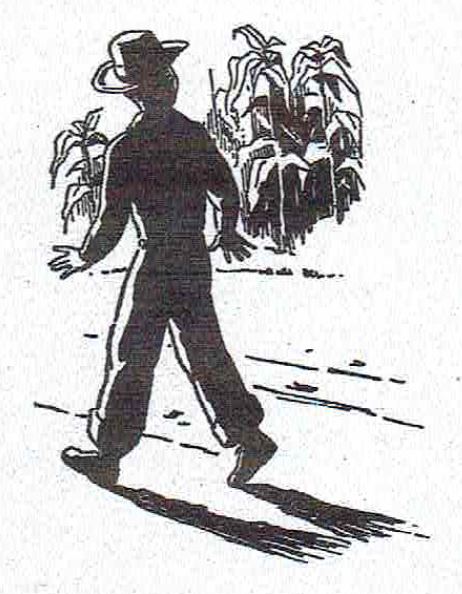 Jim was swinging along the road toward home in the twilight. He and David had had a wonderful hike to the top of Little Mountain, but it was getting late and Jim was somewhat afraid as he noticed the shadows along the road.  He began to whistle to keep up his courage.  It wouldn’t be long until he would be at home. He was coming to the cornfield in the lower meadow now.  After he passed that he could cut through the pasture and he would be at the house in no time at all.

The corn made the road darker, and the wind rustling the leaves created mysterious noises.  Suddenly Jim stopped.  He had heard a cow moo; he knew that none of Grandfather’s cows were down here at this time of the evening.

As he stood still, he heard more noise coming from the cornfield than could possibly be caused by the wind rustling the leaves.  There were cows in the corn.  In the twilight, he could see where the fence had been broken down and the beautiful stalks of young corn trampled, twisted, and broken.  Jim hesitated.  Should he run home and tell Grandfather or should he try to get the cows out by himself?  The cornfield looked very dark and mysterious.  Suddenly he remembered the story which David had told him while they were hiking today.  David wasn’t afraid of the dark, and he would prove that he wasn’t either.  Besides, it really wasn’t very dark yet and if he waited to go to the house to get Grandfather it might be too dark to find the cows when they got back.

After Jim had made up his mind he found that the task was not too difficult.  The cows evidently had been in the corn for a long time and had broken and eaten off the tops of the stalks in a large patch.

Jim felt sure that Grandfather would be much upset over the damage was done.  When he had finally driven the last cow out, he propped up the fence as well as he could and took them down the road ahead of him.  He was sure they were not Grandfather’s cows, and he began to think of how much the neighbor to whom they belonged should pay for the damage done.

Jim had the damages pretty well worked out in his mind when he finally burst into the kitchen.  Grandfather, Grandmother, and Jane were eating supper. He could hardly wait to tell of his experience.

“They did an awful lot of damage, Grandfather,” he said between bites of strawberry jam on hot biscuits.  “The man that they belong to will have to pay you a lot of money for spoiling all that corn.”

Grandfather laughed.  “He’ll never pay for the damage.  I suppose they were Layman’s cows.  He lets them stay in the road about half the time and they break into my cornfield just about every year.  There isn’t anything we can do about it except get them out when they get in.”

Jim’s mouth dropped open in surprise.  ”But, Grandfather, that isn’t right.  Why don’t you sue him for damage?  I’m sure I’d sue him.”

Grandpa shook his head, “No, Jim, we Brethren do not go to law about things like that.  One of the practices of our church is to forgive.  I feel that goodwill between neighbors is much more important than the money which I might get from a lawsuit because a few cows got into my corn.”

Jim spread another biscuit slowly.  “Well, I don’t think that’s fair,” he said at last.  “I don’t think it works to treat people like that.  I can’t help it if the church does say so.  People have to take care of themselves, don’t they?”

Grandmother spoke quietly from the other side of the table.  “Yes, Jim, but we believe that people are happier when they practice what Jesus taught.  Remember that I told you the other day that in the Church of the Brethren our practices are taken from the words of Jesus or from the teaching of the New Testament.  Jesus said that we should forgive and not go to law to settle our problems.  If we want to be truly Christian and practice the teachings in the New Testament we could not bring a lawsuit against our neighbor.  Do you see what we mean?”

Slowly Jim nodded.  “Yes, I see that being a Christian must be pretty hard.”

“Well, I don’t think so,” Jane spoke up quickly.  “All you need to do is find out what Jesus said was right and do it.”