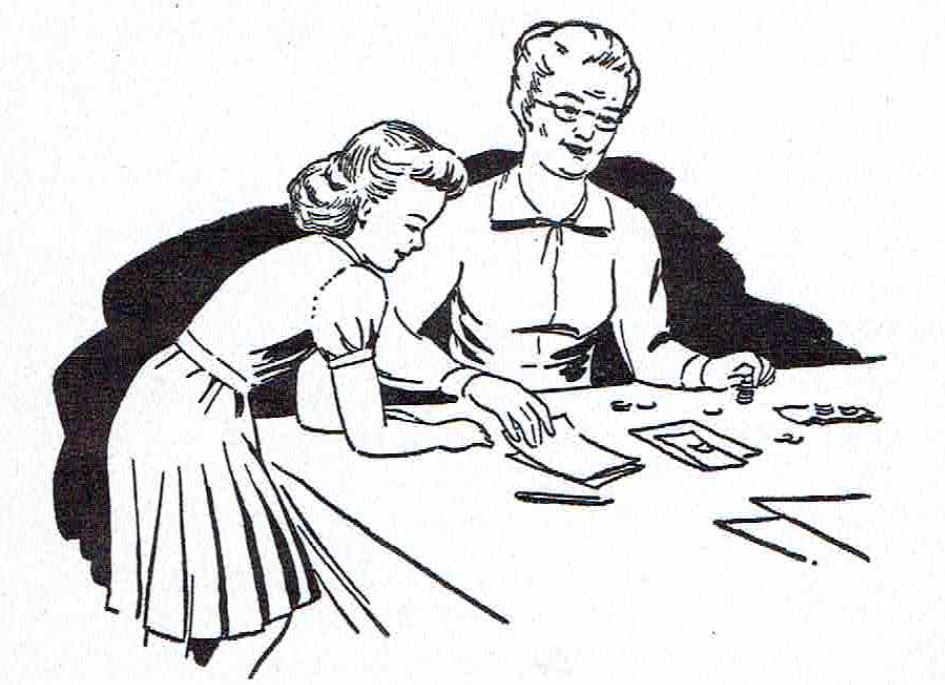 The next Saturday Jim and Jane went with Grandfather to the town.  Jane felt very important and grown up because she was going to buy the groceries for Grandmother.  Grandfather had several crates of eggs to sell today.  When he came out after taking them into the store he handed Jane an envelope.

“This is the egg money from last week, Jane.  I hope you will put it in your pocketbook very carefully, and you may use some of it to buy the groceries on the list which Grandmother gave you.

Eleven-year-old Jane felt very grown up as she tucked the envelope safely in her little white bag.  Because she was very eager to do everything just right, as she bought the groceries she carefully wrote down the cost of each item on the list.  That way she knew that Grandmother could quickly see whether the money came out right.  When she got home she ran in at once and gave Grandmother the list and the money that was left.

“Count it, Grandmother,” she said.  “I want to see whether it all comes out even.  I kept account of everything.”

Sitting down at the table, Grandmother spread out the sales slips and the money.  Sure enough, it all came out just right.

“I am proud of you, Jane,” said Grandmother.  “you were very careful.  And now, would you like to help me make up my budget for the week?  You see, I always plan just how the egg money shall be spent.”

Jane watched carefully as Grandmother began to separate the money into piles.

“What is this for?” she asked as Grandmother laid a five-dollar bill to one side.

“That is my church money,” said Grandmother.  “You see, I always tithe, and I take my tithe money out first.”

“What is a tithe, Grandmother?” Jane asked.

“We generally think of it as ten percent of what we make.  For example, if you have a dime, you will give one penny.  If you have ten dollars you will give one dollar.  The egg money this time came to forty-six dollars and fifty cents.  I think that is so near to fifty dollars that I should take out five dollars as my church tithe.  But, of course, a tithe can be more or less than ten percent, depending on our need and income.”

“Oh,” said Jane, “does Grandfather do this too?  He gets a lot of money when he sells wheat, pigs, and everything on the farm.  It looks as if ten percent of all that would be too much to give to the church.”

“No, it isn’t,” said Grandmother.  “We have much to be thankful for, and God’s work cannot be done in the world unless we help.  Every church member, you know, is responsible for seeing that the work is done.  The church needs much more money than it has, and we should never forget to share and do our part.”

“Is that in the Bible too?  Is that the reason that the Brethren give?”

“Yes, Jesus taught us to give.  Of course, He didn’t talk just about money.  He told us about giving our time, our talents, and all that we have.  You see, everything really belongs to God.  When we give we are not giving Him anything but a part of His own, because it came from Him in the first place.”

“I never thought of that,” said Jane.  “Perhaps Jim and I should tithe a part of our allowances instead of just giving a dime for Sunday school.  We could put it into envelopes just as you do on Sundays.”

“That would be fine, Jane,” said Grandmother.  “Every bit helps and we must all share and do our part.  You could think of other ways of giving too.  For example, I know of boys and girls who have shared their possessions such as clothing and toys with children who have lost their homes.  Then, too, your time can be shared to bring happiness to others.  I keep feeling that I should go and read to Grandma Shilling more often since she can’t see.  I know that time is long for her and she would enjoy having a little girl who reads as well as you do come and visit her.”