When We Pray for Others 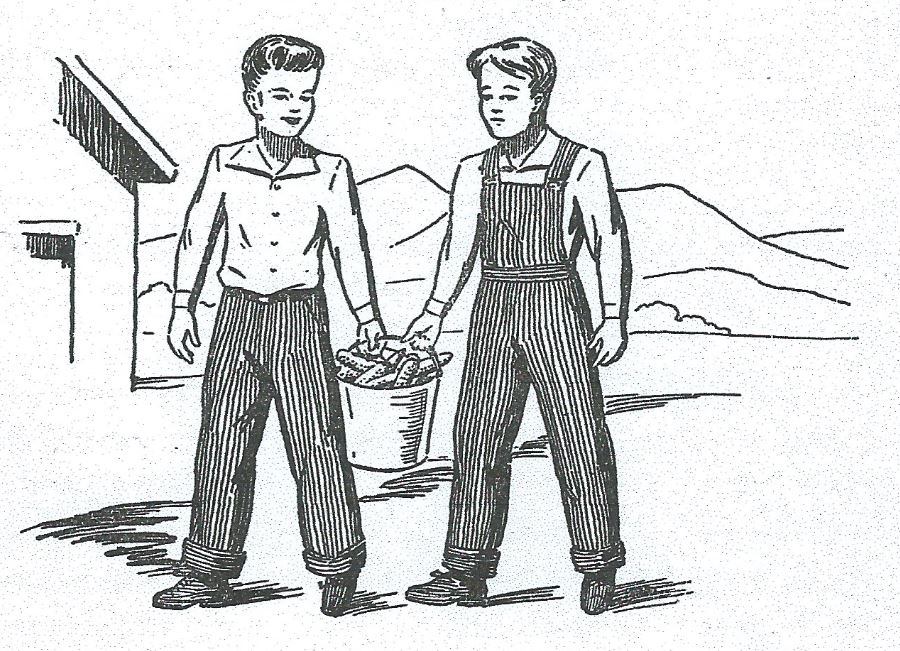 When We Pray for Others

Jim was very excited.  He and David had planned a week-end camping trip up on the mountain.  They had been planning it for several weeks and now it was almost time to leave.  Jim kept hovering around while Grandmother was packing the lunch; everything looked good enough to eat right now.  Since both he and David were Cub Scouts they felt sure that they could take care of themselves over the week end.

Jim knew that he wouldn’t be afraid if David were along, for David never seemed to be afraid of anything.

At last everything was packed, and while Grandmother was fastening the lid on the basket, the telephone rang.  Jane answered it.  She turned to Jim.  “It’s David,” she said, “and he want to talk to you.  He sounds as if something is wrong.”

Jim hurried to the phone.  David’s muffled voice came over the wire.  He sounded as if he had been crying.  “I can’t go,” he said.  “My daddy is hurt.  The tractor upset with him this afternoon and they took him to the hospital.  He is hurt very badly and I have to help here.”

Jim hung up, too disappointed even to offer words of sympathy to David.  “I might have known that something would happen,” he said, throwing himself into a chair.  “Lunch packed and everything.  Now David can’t go.”

After answering Grandmother’s questions about the trouble, he wandered out into the yard feeling very down-hearted and disappointed.  Then, hearing Grandfather leave in the car, he went back into the house to ask Grandmother where he had gone.

“He went over to David’s home,” she answered.  “We want to be sure to do everything that we can to help.  I hope that this isn’t as serious as it sounds.  Such accidents can hurt people so that they never get well.  Perhaps if you start thinking about David and his trouble you can forget how disappointed you are.  You see, David is disappointed too.  But not only that; he is worried about his father, I feel sure.”

“Yeah, you’re right,” answered Jim slowly.  “Maybe there is something I can do too.  I’ll ride over on my bike and see.”

Soon he was peddling down the road to David’s home.  He found David at the barn mixing feed for the pigs.  His eyes were red.  Jim didn’t know what to say to him but he took hold of the other side of the pail and helped him carry the heavy load to the pigs.  All evening they worked together and, with Grandfather’s help, did the chores.

It was twilight when Jim and Grandfather got home to do the milking and the feeding.  Jim did not fuss about working late.  He kept thinking about his friend.

For several days everyone waited anxiously to hear about David’s father.  Because he was so badly hurt, the doctors seemed to be uncertain whether he would get well or not.

On Monday evening Jim went over to help David again.  There was a hired man now to do the heavy work, but David still had plenty to do.

“Isn’t he any better?” Jim ventured to ask as he and David walked to the meadow after the cows.  David looked more cheerful this evening and Jim hoped that there had been good news.

“The doctor hasn’t told us that he is better,” David answered, “but I feel that maybe he is.  Mother feels that way too.  You see, the ministers went to see him today and anointed him.  I think that will help.”

Jim wanted to ask David what he meant by anointed but he decided to save his questions until he got home and could ask his grandparents.

When he got home he found Grandmother stringing beans on the back porch.  Looking up when he came in, she asked about David’s father.

Grandmother smiled.  “It’s a very beautiful service, Jim, and it is another practice of the Church of the Brethren.  There is a place in the Bible which tells us that if anyone is sick, the elders of the church should be called in and they should pray and anoint his head with oil.  I suppose that is what they did for David’s father.  The ministers prayed together for his recovery or they prayed that God’s will would be done.  They hope, of course, that it will be God’s will for him to get well.”

“I see,” said Jim slowly.  “Do many people have this done when they are sick?”

“The people who believe in it do,” Grandmother answered.  “I was anointed one time when I was very sick.  You see, we believe that people can be healed now just as they were when Jesus was here on earth.  We believe in prayer, and we think that maybe prayer means more when several people pray together.”

“I think David has been praying for his dad,” said Jim.  “He surely has been anxious about him.  What do you suppose he’ll do if God doesn’t answer his prayers and his dad doesn’t get well?  Do you think that God always answers prayer?”

“I think that He answers in His way, Jim,” Grandmother replied.  “We are not wise enough to know always what is good for us, and sometimes we do not pray for the right things.  That is the reason why when we have an anointing service the ministers always pray for God’s will to be done.  Maybe David’s father would always be a cripple if he would get well and it might be better for him not to get well.  We are not wise enough to know what is best.  That is the reason we pray that way.  I hope that David understands.”

Jim stood up.  “I didn’t know that prayer was so important.  Of course, I’ve always said my prayers because Mother taught me to.  Now this makes it seem different.  We all should pray for David’s father, shouldn’t we?”

“I think you are right, Jim?” agreed Grandmother.

Learning the Brethren Way with Jim and Jane,