When We Help Others

When We Help Others 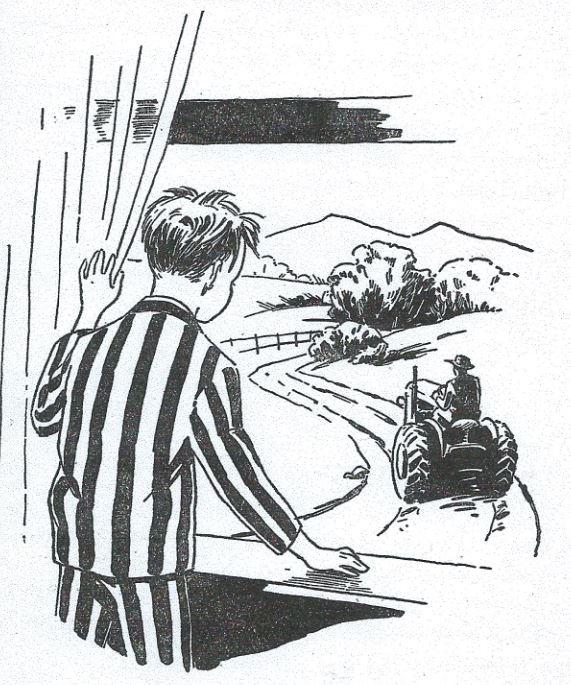 It was very early in the morning—Jim was sure of that.  The birds were twittering outside his window as they did every morning when it started to get light.  The sun, which always threw its first rays through the east window beside his bed, was not even peeping up yet.  Something had made him wake up.  For a moment Jim couldn’t decide what it was.  Then he heard a tractor.  Thinking that it sounded like Grandfather’s tractor, he looked out the window just in time to see Grandfather turn from the lane down the road.

Jim lay down wondering where Grandfather could be going so early in the morning.  He was sure that it was too early even for breakfast but he could hear Grandmother moving around in the kitchen below. He decided that since he was awake he might as well get up.

“Where did Grandfather go?” he demanded as soon as he got downstairs.  “Where is he going this early in the morning with the tractor?”

Why, Jimmy boy,” Grandmother said, “You shouldn’t be up so early.  I’m sorry that the tractor woke you.  You see, Grandfather is going over to cut Mike Payne’s wheat today.  Mr. Payne fell down the stairs and hurt his ankle, and now it is impossible for him to work.  His wheat is going to waste.”

“Will he pay Grandfather?” Jim asked.

“I don’t think Grandfather wants pay,” Grandmother answered quietly.  “He is doing this to help Mr. Payne because he needs help.”

“But I don’t think he ought to help him.  After all, it was his fault that he hurt his ankle.  If he hadn’t been drunk it wouldn’t have happened.  If grandfather helps him this time maybe he’ll always think that he will get help when he needs it and keep on drinking.”

“I suppose that could happen, Jim,” agreed Grandmother, “but I don’t think that it will.  I believe that it pays to help people they are in need whether they deserve to be helped or not.  Don’t you think that is what Jesus did when He was on earth?  Do you really think that all the people whom He healed and made well deserved to have Him help them?”

“I don’t know,” said Jim.  “But Grandfather has so much to do here.  He works so hard.  If he goes over there and works all day, he’ll be too tired to go fishing Saturday—and he promised to go.”

“I wouldn’t worry about that,” said Grandmother.  “You know Grandfather well enough to know that he keeps his promises.  I am sure that if he told you that he would go fishing he will go.  You see, Grandfather tries to do what he thinks is right and he feels that he should help Mr. Payne today.”

Jane came into the kitchen, rubbing her eyes sleepily.  “Why did you get up so early? She asked.  “I heard you talking and I got awake.”

“Oh, I’m sorry,” said Grandmother.  “You are both early birds this morning.  We should plan something special for today since you are up so early and we will have a whole day to ourselves.  Grandfather took his lunch with him.”

Jane began to dance around the room excitedly.  “Let’s have a picnic,” she said.  “A picnic in the meadow.  We’ll go swimming in the big hole and have a wonderful time.”  She looked questioningly at Grandmother, who was smiling and nodding.

I think that would be fine,” she said.  “Jim missed his trip over the week end because of David’s father.  Maybe this will help to make up for it in a small way.”

The telephone rang, and Jane rushed to listen.  Grandfather and Grandmother were on a party line, and ever since David’s father had ben hurt they listened to find out whether he was better.  A few minutes later Jane put up the receiver.  She was smiling.  “I have good news,” she said.  “Mr. Smith is better this morning.”

Jim looked at Grandmother, “I guess it did help to pray.  Gee, won’t David be happy to know that his dad is really getting well?  I wonder if he could come with us on our picnic.  Do you mind if I ask him?”

Grandmother agreed, and after breakfast Jim called David.  Grandmother and Jane were cutting fresh flowers for the house as Jim came out to talk with them after his telephone call. “David has to work in the garden today,” He said.  “but I have an idea.  Would it be all right for me to go over and help him so that he’ll get through twice as fast and then he could come to our picnic?”

“I’ll help too,” said Jane, “then he’ll be sure to get through.  I think he ought to come to the picnic to celebrate because his father is better.”

Grandmother smiled.  “I’m really proud of you for wanting to help.  Working in the garden on a hot morning like this will be hard work.  But I think you will enjoy your picnic more if you work and then play.  I’ll pack an extra-big lunch because I know you will be very hungry.”

Learning the Brethren Way with Jim and Jane,