When We Do Hard Things 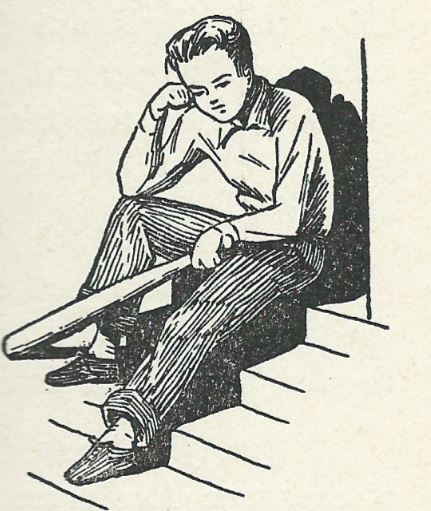 When We Do Hard Things

One beautiful warm afternoon in June, Grandmother and Jane were shelling peas on the back porch.

“All these peas should make a lot of cans,” Jane observed.  “I think that Jim should have stayed and helped us.  He knew that this was a big job.  Boys will do anything just to play ball.”

“It would be nice to have his help,” agreed Grandmother gently, “but we must remember that Jim had planned last week to play ball on this particular afternoon and he couldn’t know at that time that the peas would be ready for us to shell.  Anyway, maybe he’ll help when he gets home.  I think there will be plenty left for us to finish tonight.

Jane looked at the heaped-up baskets and sighed. “I think so, too,” she said.

Suddenly they heard footsteps on the walk outside, and they both looked up in surprise when Jim opened the screen door and came onto the porch looking very down-hearted.

“Well,” said Jane, “I’m glad that you changed your mind and came home instead of playing ball.  We were just talking about how much we need you.”

Jim frowned.  “Yeah?” he murmured crossly.  “I guess I’ll have to help.  If David hadn’t thrown such a fit we would he had a good ballgame this afternoon.”

“What happened?” asked Jane.  “Do you mean that they called off the game?”

“Yes; David called it off.  I don’t think he’s a very good sport, and all the other fellows thought he was yellow, too.”

“What did they do?” asked Grandmother quietly.

“Well,” began Jim slowly as he seated himself with his hat between his knees, “some of these fellows are different from David.  They used some words that David didn’t like.  Of course, I didn’t like them either, but everywhere you go you find boys who talk like that; so I’m used to them.  I guess David isn’t.  Anyway, he told them that they would have to stop swearing or he would call off the game.  I didn’t think he meant it, but he did.  So here I am.  No ballgame.  Everybody went home disgusted.  I had a notion to tell David that I thought he was a poor sport but I decided I’d better not.  I just came on home.”

“I’m glad you didn’t tell David that, Jim,” Grandmother said.  “He probably feels very bad about this too, but I suspect he did what he thought was right.”

“Aw, Grandmother, now here you are siding with David.  I might have known.  What do you think would happen if everybody tried to tell everyone else what he could say?”

“I’d hate for them to try to tell me,” said Jane.  “We have freedom of speech in this country.”

“But I don’t think you understand me, children,” Grandmother said.  “David is the captain of the team, isn’t he?”  Jim nodded, and Grandmother continued, “That meant that he is somewhat responsible for the kind of game that the boys play.  David is a church member and he is trying to be a good Christian.  He knows that one thing that Christians do not do is to take God’s name in vain, that is, speak it carelessly.  I believe he feels that it is not only his responsibility not to do that, but also when he is in charge of a situation where it is done he needs to show the others that he knows it is wrong.”

“But Grandmother,” objected Jim, “people do it all the time.  You should hear the fellows at my school when the teachers aren’t listening.”

“But Jim,” asked Grandmother, “do you think that if everyone does something that makes it right?

“No, I suppose not,” Jim said slowly, “but this seems like such a little thing.  David doesn’t have to use language like that.  I don’t because Dad and Mother don’t want me to, but I always figure that if the other fellows want to, it’s their privilege to talk like that.”

“I think Grandmother has a point,” said Jane.  “I have never thought about it before, but if there is someone on the team who heats or doesn’t play fair, it’s David’s job to talk to him, isn’t it?  It’s David’s job to help everyone to be a good sport in the way he plays; so maybe he should see that they talk as they ought to also.”

“That’s exactly what I mean, Jane,” said Grandmother.  “You don’t think David did this because he wanted to be bossy or because he enjoyed doing it, do you?”

“No,” Jim said slowly. “I really think he felt bad about it.  He went home looking as if he was about ready to cry and he told the fellows that he was sorry, but he just couldn’t be captain of a team if the fellows were going to swear.”

“What do you think they’ll do – choose another captain?” asked Jane.

Jim sat up straight.  “I don’t know, but I for one won’t be in favor of choosing another captain.  I think David is a jolly good fellow and I am beginning to see that he was a good sport too.  After all, it seems that he’s trying to be a good church member as well as a good baseball captain.”

“You are exactly right, Jim,” said Grandmother.  “Boys have to make up their minds what they will or will not do.”